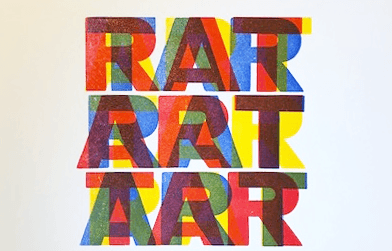 Jeff Waldvogal has been a letterpress printer for about 45 years now, and for his full-time job, for the past 25 years, he has been working at a paper company. Jeff first began his letterpress journey in a class offered at his high school in 1972. He later went on to get a degree in printing from a 4-year program offered at California Polytechnic State University in San Luis Obispo, CA. Though letterpress printing was a part of his life before, he didn’t really start getting passionate about letterpress until 1978 when he first began his collection of letterpress materials.

Jeff didn’t even obtain his first press until almost 24 years later, therefore in the meantime, he was collecting materials and different letterpress items. When Jeff received his first press in 2002, he found a 1908 Chandler & Price Old Style printing press. However, from natural wear and tear of the machine, it was partly broken and he decided to buy a 1928 press in addition. As of right now, Jeff creates all of his work for fun, none of his work is commercial. He is also a part of APA (The Amalgamated Printers’ Association), he regularly attends letterpress conferences, and enjoys creating prints in his garage/studio.

For Jeff, the art of letterpress is “all about doing something with your hands,” and that “it’s fun, it’s mechanical, and to me it’s relaxing.” However, he doesn’t exactly consider himself to be a designer because he tends to think more technical. As many letterpress printers, he considers himself to be very picky with his final prints and the way he creates them. He often has to think within the limitations of his press, and then work out from there to create new and unique prints.

As for his typical printing process, he states that, “I’ll go out and disappear into the garage, which is where my press is, thinking I am going to be out there for two to three hours on a Saturday and I’ll go out at 9 o’clock in the morning, and finally come back in about 7 o’clock at night.” For Jeff, “A typical run for me is anywhere from 50-300 pieces,” which usually will only take him about 45 minutes of time to actually run through and print. However what takes the most time for him is laying out the print, setting it up, and doing final little tweaks throughout the process. After creating the final print and going through his final run, Jeff often revisits the print again and experiments with what more he can do with it just as major tweaks, twists, or combination prints.

“I’ll go out and disappear into the garage, which is where my press is, thinking I am going to be out there for two to three hours on a Saturday and I’ll go out at 9 o’clock in the morning, and finally come back in about 7 o’clock at night.”

Fairly recently, Jeff has found a new addition to his printing process. In previous years, he would begin by simply looking through his type collection, making a decision on what he wanted to work with, and then experimenting with it. However now, within the past 3-4 years, Jeff has begun to start pieces on the computer, digitally. Doing so allows him more freedom in working with and choosing colors, typefaces, and layouts. Working digitally first greatly impacts his planning process as well as what materials he will use and how the end result will turn out.

Jeff often finds that it is challenging to find the time to create what he wants to do, outside of working at his full time job. However a new challenge that he faces is working with materials outside of hand-set type, which he exclusively worked with previously. Now he is working with different materials such as polymer, zinc, and copper plates as well. Jeff mentioned that one thing to keep in mind is, “obviously in letterpress, each color is a separate pass. So you have to either order the plates that are color broken or you have to set them by the color you use.”  The challenge that arises with these methods is a matter of narrowing down the ideas that he has as well as just simply finding the time to be able to execute them adequately.

For about the past five or six years, Jeff has been printing different variations of Christmas Trees for his family Christmas cards. His first of the series consisted of hand-set type (36pt. Huxley Vertical) in the shape of a Christmas tree, spelling out the final 4 parts of the Christmas song, “Twelve Days of Christmas.” He created cards the following years with the same idea, just using the different sections of the song, therefore, every tree was different because it included different letterforms, however all a part of the same idea and series.

In addition to the “Twelve Days of Christmas” cards, Jeff also created a set of Christmas cards by printing forms using Legos, which he considers to be his most challenging and demanding print that he has ever created. He felt that using Legos to print was a great way for him to merge two of his hobbies and passions together to create something great. This card consisted of multiple round and square tiles and took 7 passes through the press to create the print achieved. When Jeff first started this print, it was merely an experiment, he had no idea if it was going to be at all successful. In order for this to work, Lego base pieces had to be measured and then mounted to strips of wood that would raise the Legos to be type-high for the press. This system allowed him to try out different color schemes and color placements for the lights.

Roughly ten years ago, Jeff also created a print that resembles a yellow flower using only one letterform, an exclamation point, and 16 passes through the press, just rotated. According to Jeff, “It wasn’t hard, it was just figuring out the jigs so that I could register it.”

There is a very strong sense of community within the letterpress world. Many printers feel a strong connection to the letterpress community. For Jeff, there isn’t any one specific person who he feels a strong connection with, but rather a multitude of different people and groups that he enjoys working with, collaborating with, and speaking to about letterpress. Jeff took his first workshop with David Wolske, and in taking those workshops and attending those conferences, just as Hamilton’s Wayzgoose, he has found his personal sense of community within letterpress.

Jeff has noticed that there is a wide range of ages within the letterpress community, however that does not come between anyone or their ability to be great printers. In fact he states, “That’s one thing that I have found as a rule, the letterpress community is very friendly and very open to having discussions with people, and sharing ideas.” People are often helping each other solve difficulties or challenges, learning new techniques, and just coming together to make great work.

“That’s one thing that I have found as a rule, the letterpress community is very friendly and very open to having discussions with people, and sharing ideas.”

In addition, he also finds it interesting how there are so many aspects of letterpress to focus in on, and everyone has their favorite part. While some people might obsess over typefaces, others might be interested mainly in the mechanics of the machine. Jeff would classify himself as a “paper geek” because he loves working with paper, different paper styles, and the effect it can have on the print overall. Everyone has their own techniques and preferences, and Jeff feels that is something to embrace because it allows the community to learn a little bit about everything and from everyone.

The Past and Future of Letterpress

When Jeff was attending high school, letterpress was common enough to be offered as a class at school, and was even an attraction for people coming to tour the school and for events. When Jeff went to college and began typing, he found that printing was much more formal and exact. There are many purest, still to this day, who would be appalled by being more experimental and creative with letterpress, or working digitally first.

Now, letterpress has become much more fluid, creative, and open to interpretation. When before, impressions in paper were highly unacceptable in letterpress, now some people purposely create a bit of impressions to add texture. Some advice Jeff has for current and armature letterpress printers would be that materials are getting to be more and more expensive as time goes on. Jeff advises that for up and coming letterpress printers, though it can be difficult to find letterpress materials, especially at a manageable price, to pick it up and grab it as often as you can. Many wood and mental materials are getting thrown out or recycled and it is better to begin your collection sooner rather than later because materials are not going to become any more readily available.

In the future, Jeff anticipates that the letterpress world will, “do nothing but grow, because of the whole ‘Etsy movement’, and making things by hand… a handwritten note or a card is so unusual that people are like ‘oh my god, somebody actually spent the time to send a thank you note’… because we all get hundreds of emails a day and that’s handy, easy and convenient, but most emails are not exactly heartfelt.” He feels that with the novelty of something that was handcrafted in this current world and society we live in, he feels that letterpress will get even more attention than before, because people are starting to revert back to that idea.